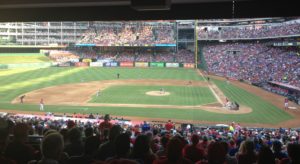 I’m not a baseball fan, but it was fun to watch the Los Angeles Dodgers and the Houston Astros in this most recent World Series. The Astros had never won the title before, but were able to pull it out in Game 7.

In watching the last few games, I began to learn through the sports commentators what the Houston Astros had changed to get to where they are now. The first thing I noticed was the creation of a winning culture, which was put into practice a number of years ago when the personnel was chosen. Second, I noted that they did a thorough analysis of their strengths and weaknesses; then they went back and really focused on eliminating those weaknesses. One of the statistics that stood out to me was the percentage of strikeouts. Where they used to be in the middle of the pack, they were the first in Major League Baseball for the least number of strikeouts this season.

Thinking about that in a business setting, we’re all in competition and we’re all looking to be — if you will — World Series winners. What the Houston Astros did was identify their goal: win the World Series. In our businesses, we need to pinpoint what it is that we want to do, identify our strengths and weaknesses, and build our enterprises from there.

This boils down to a couple of things that I think are really important. One is culture, which is something that we have to focus on very often. Another is timing. You don’t get shade from a tree unless you plant the tree well in advance. I am often called into business situations where we do a financial plan for the owners as well as the business, sometimes with the tilt of doing succession or transition planning. Having done this numerous times, the biggest lesson that I’ve learned is this: for a successful outcome, you need enough time to make it happen. This is not an overnight process.

I’m often rebuked or rebutted for this need for time because the pace of business is so quick these days and we are in a culture where we feel like we want to do it right here, right now. However, just like what we learned from the Houston Astros, nothing happens overnight. When we set our goal as winning the World Series, we have to build the team and the process years in advance to achieve that great result.